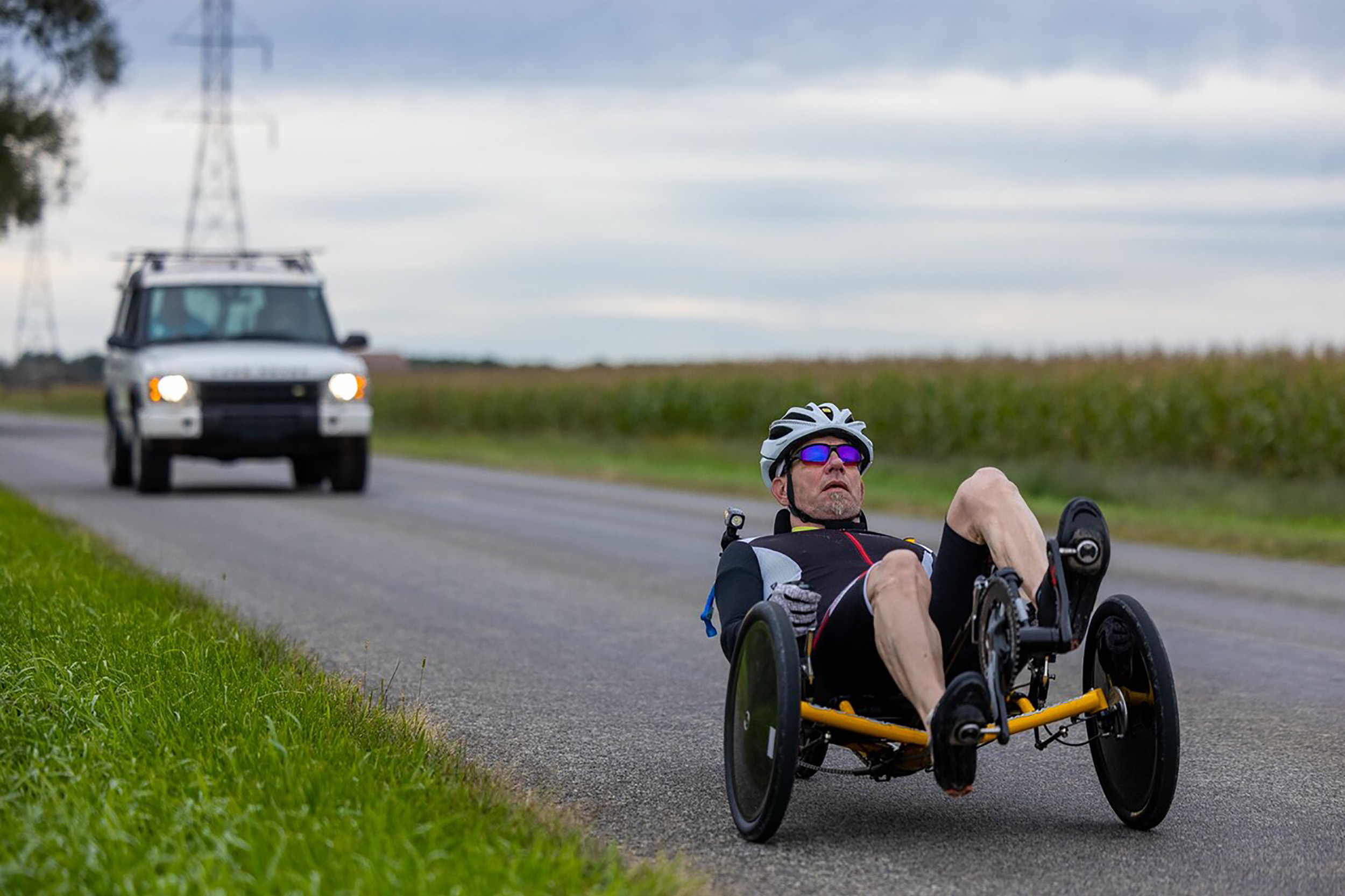 Sixty-five-year-old Marshall Randall smashed seven recumbent-trike speed records previously held by a much younger man — and he’s not done yet.

They say never to sell anything you wouldn’t use yourself. Recumbent cyclist Marshall Randall must take this maxim to heart.

Randall, the director of sales and marketing at recumbent cycling manufacturer WizWheelz, recently used one of the company’s bikes to trounce no less than seven World Ultra Cycling Association (WUCA) records.

Randall used a GreenSpeed Aero to set records in the 100k, 200k, 300k, 100-mile, 200-mile, 6-hour, and 12-hour recumbent trike road categories. He conducted his ride on a frosty day in late September, in rural Michigan, and maintained an average speed of 17.31 miles per hour.

Although he competed in the 60-to-69-year-old group, Randall’s times make him the fastest recumbent trike rider in any group in all of those seven road categories. The achievements also break several Guinness World Records.

The ride was no cakewalk for Randall, who said he struggled shortly after the first 100 miles and, “then again from eight hours through 10 or 11 hours.”

Randall went on to thank his wife of 40 years, Kelle, as well as the rest of his support crew. As far as fuel is concerned, the cyclist said he relied on gels, drink mixes, and “peanut butter, honey, and banana sandwiches — and some super salty potato chips.”

Age Is Not the End

It’s his work in the recumbent bike industry that encouraged Randall to make the attempt.

“Being involved with a recumbent trike manufacturer whose primary customer is over the age of 50 inspired me to inspire others,” he noted in his record report for WUCA.

“I really wanted to get something out there that speaks to ‘age is not a disability.’ Many aging adults are giving up too quickly on continuing an active lifestyle,” he continued.

To prepare for his attempt, Randall trained twice a day on weekdays, with longer sessions on the weekends. Weekdays were for indoor Zwift rides, and weekends were for outdoor riding. Randall’s full-time job has normal hours, so he had to be on dawn patrol during the week and make the most of his weekends.

“It was really just getting out on the local trail, and literally treating those rides as if they were record attempts,” Randall said about his weekend training rides. “I knew what the 100k record was. I knew what the 100-mile record was, and I would try to break that record every time I rode.”

What’s Next for the Record Breaker?

Randall is a long-time endurance athlete with a storied history of events and competitions to his name.

“In 1983, I quit my driving job at UPS, and my wife and I moved to Apopka, Fla., so I could train for the Olympic Road Cycling Selection Races,” Randall told GearJunkie.

Although he never made it to the Olympics, Randall subsequently spent a successful few years as a professional athlete in South Carolina. “[I] was a Triathlon Magazine Duathlon All-American a couple of times, but never hit the big leagues,” he said.

When asked what’s next on his to-do list, Randall’s response was, perhaps, unsurprising.

“I think about a rinse and repeat to lower all the records, as well as a go after the 24-hour record,” the athlete said. “I’m too old to go fast, so I have to focus on going long.”

Future Of Human Powered Transport Is A Trike