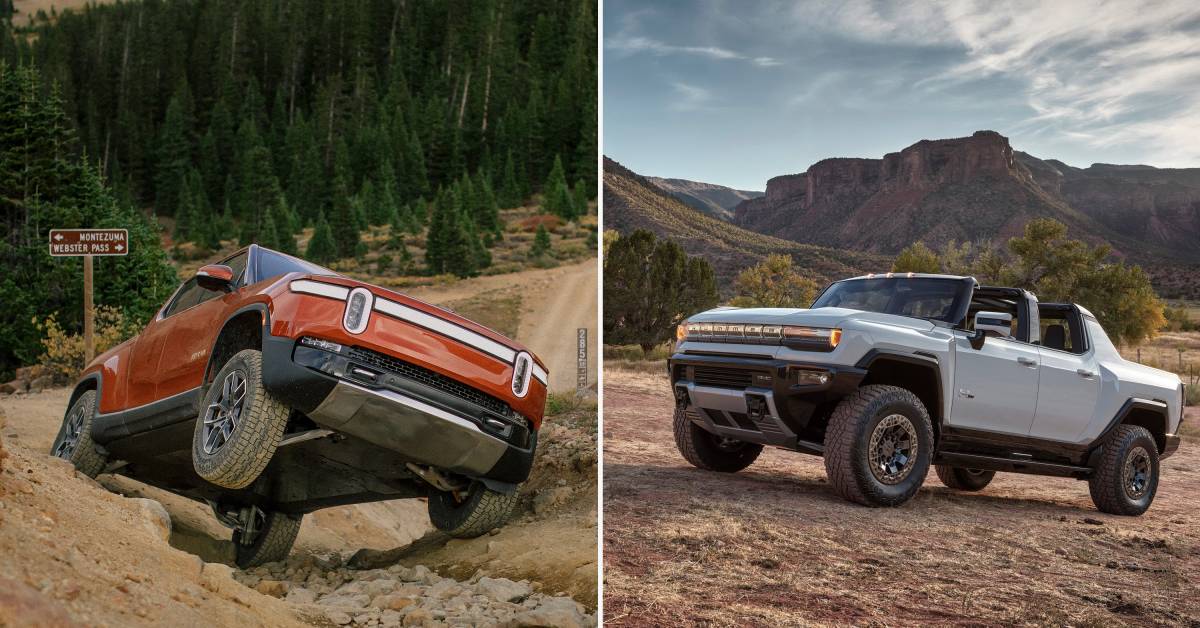 If the words “battery-electric vehicle” (BEV) bring up images of a small, slow, and quirky product like the Nissan Leaf, you may be in for a big surprise in the months ahead. Literally, quite big.

The number of BEVs on the road will jump from a baker’s dozen at the end of the 2021 model year to more than 50 by late 2022. And that will include an assortment of large, long-range, high-performance products like the new Rivian R1T and GMC Hummer EV.

They are, in fact, the first two of what could be, by mid-decade, anywhere from seven to 10 all-electric pickups. A list that eventually will include the Tesla Cybertruck, the Ford F-150 Lightning, battery-powered versions of the Chevrolet Silverado, GMC Sierra, and Ram 1500, and an assortment of startup offerings, like the Bollinger B2.

Set to reach showrooms before the end of the year, the Rivian and GMC Hummer pickups will make their debuts in First Edition limited-edition form, the two automakers clearly intent on showing everything that their new products are capable of.

I got my first chance to find out what they offer — and how they compare during a recent back-to-back drive of the debut models of both the R1T and the Hummer EV.

Let’s start by looking at what they have in common. The initial versions won’t come cheap. The Rivian R1T Launch Edition starts at $73,000, while the GMC Hummer Edition 1 carries a base price of $112,595 — making it the most expensive factory pickup ever.

The Rivian and the Hummer share the ability to travel at least 300 miles per charge.

Each is based on an entirely new, skateboard-like platform placing batteries and motors below their load floors. That offers a number of advantages in terms of the way their cargo and passenger compartments are laid out. With no driveshaft to worry about, the R1T features a “Gear Tunnel” storage compartment below the cargo bed and ahead of the rear wheels.

The two products also take advantage of the tremendous torque that electric motors can deliver. That means 0-60 launch times of around 3 seconds, the ability to not just go off-road but also to handle some serious rock crawling, and plenty of muscle to do what you expect from a full-size pickup.

While neither company has released all their final specs, Rivian broadly promises a combined towing and cargo weight of at least 11,000 pounds. The Hummer is expected to offer similar, if not bigger, numbers.

Plenty in common, yes, but there are substantial differences, as well. While nowhere near as over the top as the upcoming Tesla Cybertruck, the Hummer is, from a design perspective, far more flamboyant than the relatively conservative R1T.

It picks up key design cues from the classic Hummer H1 — which was itself largely based on the military’s old HUMVEE. There are the relatively slab-sided body panels and the upright windshield.

The grille also will provoke a sense of déjà vu, but since there’s no need to send cooling air into an engine compartment, the original slats are replaced by a massive, seven-segment light bar.

Rivian’s pickup is more traditional in shape, and you might mistake it for a conventional gas-powered truck, at least from its silhouette. Upfront, however, R1T is far more distinctive, with its own lightbar wrapping into the forward quarter panels, as well as cute-but-quirky oval headlights.

Rivian designers managed to squeeze in storage space in all sorts of places, including both the Gear Tunnel that runs the entire width of the pickup, as well as a large “frunk” under the hood. The R1T yields a useful 68 cubic feet of storage, in all, along with a 54-inch cargo bed.

The Hummer offers plenty of storage nooks of its own and a 5-foot cargo bed.

The two also diverge when it comes to cabin design. There’s a clean, almost Scandinavian look to the R1T, with the Launch Edition’s open-pore wood and vegan “leather” giving it more of the feel of a luxury vehicle. The Hummer has a more rugged and militaristic appearance — as its heritage would suggest.

As has become the norm for battery-electric vehicles, the Hummer and the R1T use reconfigurable gauge clusters, with large touchscreens — 13.4 inches in the GMC, 16 inches in the Rivian — dominating their instrument clusters.

In the R1T, it controls everything. Absolutely everything, down to the position of the steering wheel and the outside mirrors. The Hummer adds a number of toggles and switches, primarily to control off-road functions.

Each vehicle features an array of high-tech safety technology. Tap the R1T’s shifter twice and it activates Level 2 autonomy, though the system still requires you to maintain a light grip on the steering wheel.

The Hummer goes a step further. It gets the latest version of General Motors’ Super Cruise system which can be operated completely hands-free up to 200,000 miles of U.S. and Canadian limited-access highways.

Meanwhile, both trucks can download software updates and new features using smartphone-style over-the-air updates. The R1T features an extensive array of camera, radar, and sonar sensors, and Rivian’s highway assist is expected to add full hands-free capabilities in the future.

The Rivian R1T and the Hummer both deliver the sort of power and performance that traditional truckers are likely to envy. Rivian relies on four individual motors to punch out 800 horsepower and about 900 pound-feet of torque. The system is quick enough to give you a nosebleed.

Meanwhile, with one motor for each wheel, the R1T features highly responsive all-wheel drive, as well as torque vectoring. The latter directs additional power to the outside wheels to help improve handling while cornering.

The GMC pickup’s three motors — one on the front axle, two on the rear — make an estimated 1,000 horsepower and, GM claims, 11,000 pound-feet of torque. By traditional measurements, however, the figure is really around 1,100 pound-feet. It needs the extra muscle considering the Hummer EV weighs in at around 9,000 pounds, 50% more than the R1T.

The results are similar, at least off the line, with 0-60 times of around 3 seconds. To put that into perspective, that’s a mere 0.3 seconds slower than a Porsche 911 GT3.

The trucks will get around 300 miles per charge. GMC hasn’t released final specs on its lithium-ion battery pack but it’s believed to be close to 200 kilowatt-hours in size, with the Rivian a more efficient 135 kWh. Rivian plans to offer an optional 400-mile pack next year, which will require around 180 kWh.

While its design would suggest that the 2022 GMC pickup has a more brutish manner to it on the road, it’s surprisingly smooth, quiet, and comfortable, especially when compared with the original family of gas- and diesel-powered Hummers.

The Edition 1 has a relatively light feel to its steering wheel. It is easy to maneuver, despite its mass, thanks to a four-wheel-steer system. The direction the rear wheels turn depends upon how fast you’re driving, but the result is better cornering at highway speeds and easier parking around town. The system also allows the Hummer to “crab walk,” moving diagonally when in off-road mode in order to take tight turns out on the trail.

The 2022 Rivian R1T takes things to an even more refined level. It drives like a premium luxury sedan, accelerating effortlessly — and all but silently. But, like the Hummer, it takes just a tap on the throttle to bring all the power lurking in its four motors back to life.

By choosing how much power to send to each individual wheel, the R1T not only can torque vector but also take tight turns off-road. But a once-ballyhooed feature meant to let the truck virtually spin in place has been deactivated for now. Rivian hopes to turn it on at a later date using a software update.

GMC and Rivian bill their all-electric entries as capable of handling even the roughest off-road terrain, as well. I’ve yet to experience that for myself — though colleagues who’ve had the chance have been uniformly impressed by the capabilities built into both Hummer and R1T. I’ll look forward to reporting more on that in the near future.

Automakers like to talk about the “surprise-and-delight” features offered by their products. And there are plenty to point to with both the Rivian and GMC pickups. They both offer 120-volt power outlets in their cargo beds.

Hummer features a multifunction tailgate, as well as those removable roof panels. Rivian adds an air pump, as well as a flashlight tucked into its driver’s door, and a Bluetooth “camp speaker” in the center console.

Which of the two all-electric pickups to choose? That’s a surprisingly difficult choice.

The 2022 GMC Hummer EV and 2022 Rivian R1T have plenty going for them: range, performance, distinctive styling, and lots of welcome features. For those who want to visually stand out from just about anything else on the road, the Hummer Edition 1 would seem the right choice, albeit at a steep price premium over its all-electric rival.

The R1T is a bit more subtle, but it certainly won’t get lost in a crowded parking lot. And it can be driven home for about $40,000 less than the Hummer, at a base of $73,000 for the Launch Edition.

In reality, both launch models now appear to be sold out. Whichever one appeals to you, hang tight, as there’ll be additional versions of the Hummer and R1T coming to showrooms next year.