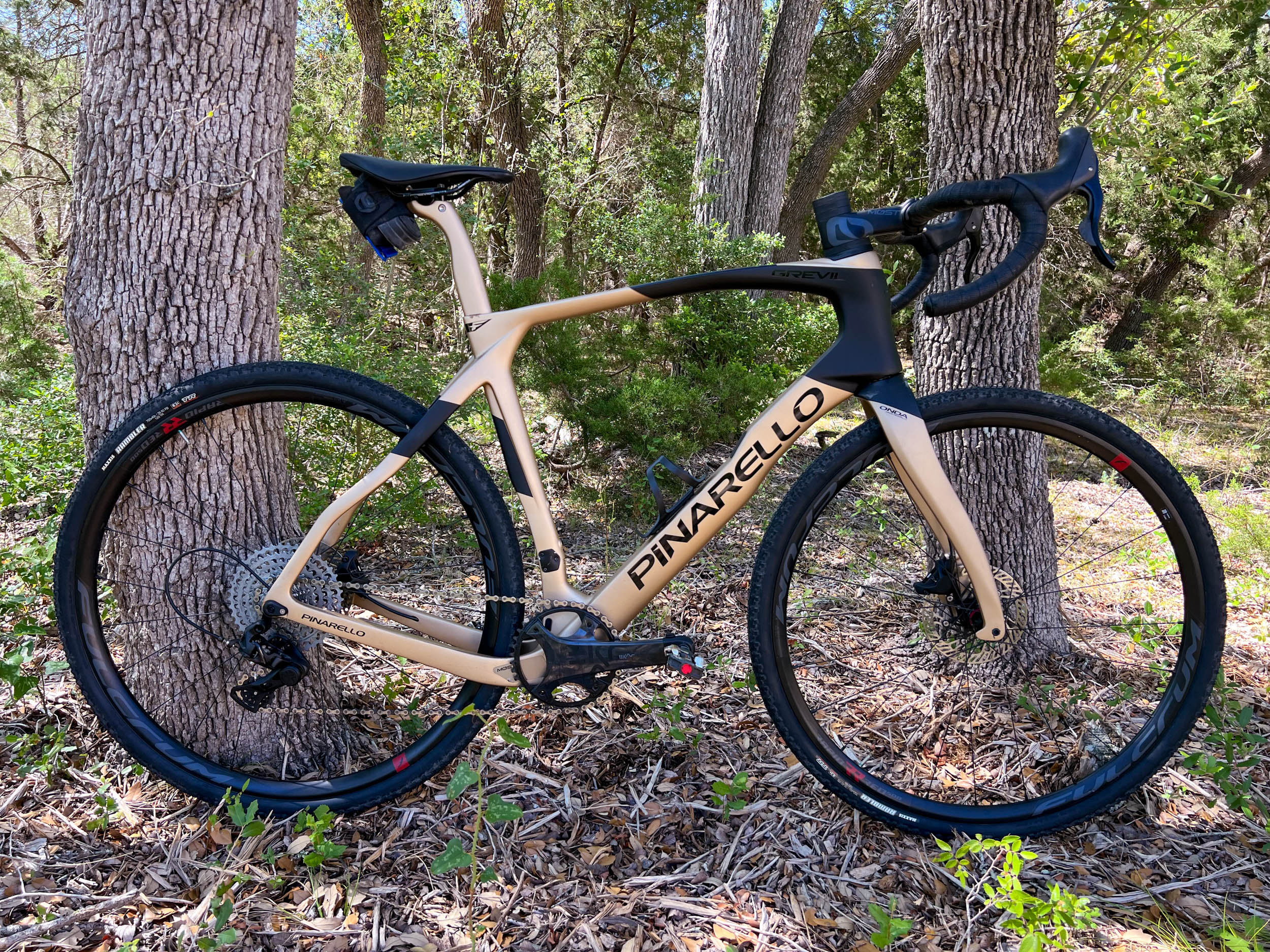 Pinarello is one of the most lauded road racing marques. This summer, it brought its hard-earned heritage to gravel with the Grevil F.

Gravel riding didn’t emerge from a desire to compete. Instead, its roots harken to exploration and a more relaxed vibe, similar to the beginnings of mountain biking. But humans being humans, gravel riders started morphing into racers recently, and competitive cyclists from other disciplines crossed over to the gravel racing scene.

Pinarello reached fame through the highest levels of road racing, from Alexi Grewal’s historic 1984 gold medal in the men’s road race in Los Angeles to racking up more Tour de France victories than any other bike manufacturer; the brand’s bragging rights are undeniable.

I tested the Grevil F for 3 months over the hilly and hard-packed caliche and stone-ridden roads surrounding my house in Wimberley, Texas, for this review. Within a few minutes, I understood that the bike would be the perfect tool for the short but intense rides I cram in during the week.

In short: The Pinarello Grevil F is a pure racing machine. It’s unapologetically efficient and is ready to get you around the course as fast as possible. This isn’t your bike if you want to tour remote back roads for a weekend of relaxed exploration. But if you want to smash competitors or Strava segments, the Grevil F will burn and turn with a few caveats. 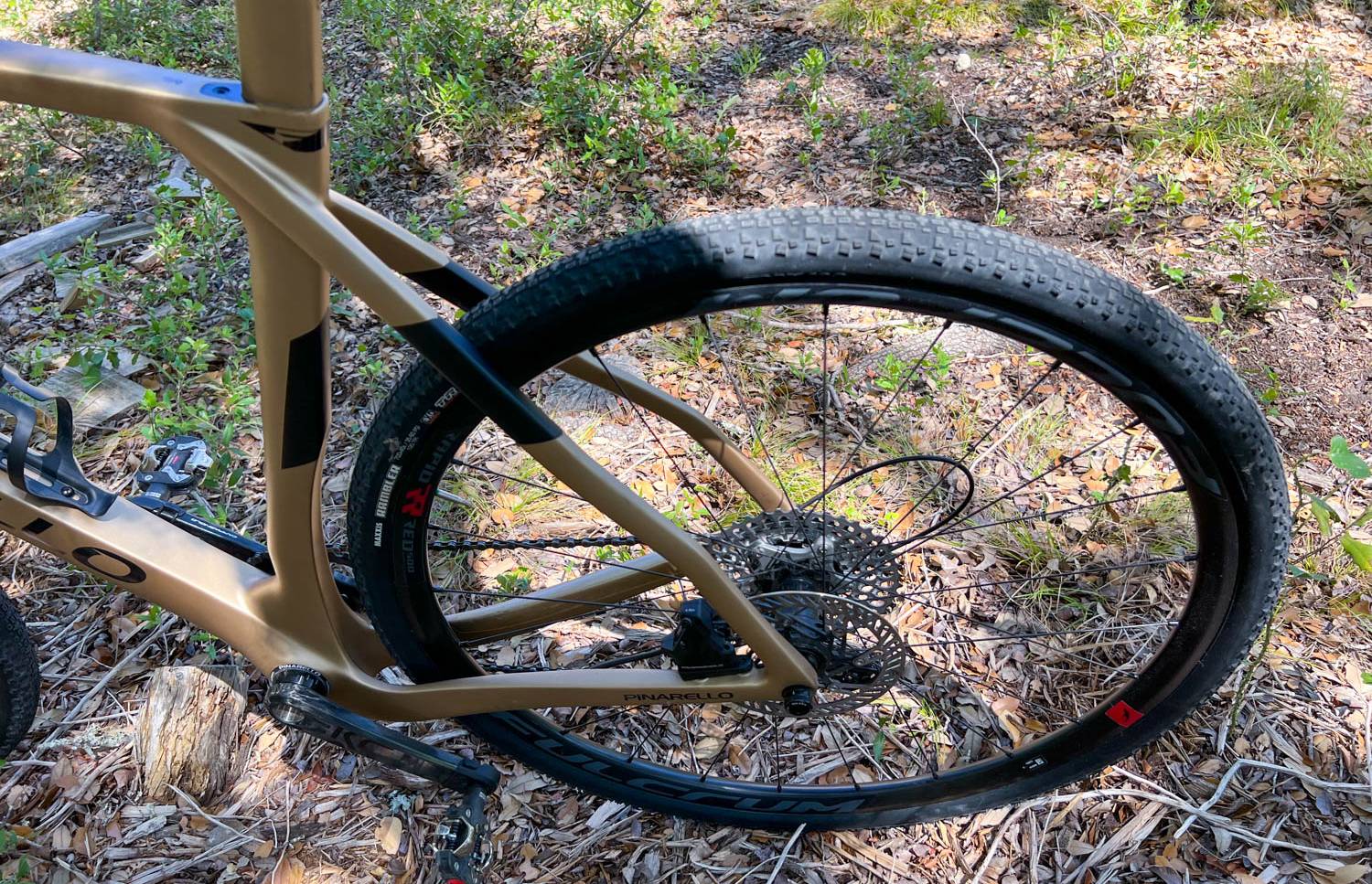 When I unboxed the Grevil F, it was impossible not to stare at the curves, those fork legs, those seat stays. The flowy silhouette is a Dogma F signature, and Pinarello graced the Grevil F with similar lines. But they aren’t there to just turn heads.

The rear triangle isn’t the same on the drive and non-drive sides, thus the “asymmetric” tag from Pinarello. This stems from the simple logic that the forces on the left and right halves of the frame are not equal, and thus, they shouldn’t be symmetric.

The fork legs curve forward and produce a dedicated 50mm rake. Pinarello claims both of these elements improve handling and vibration damping.

And, since we are talking about racing, Pinarello graced the Grevil F with aerodynamics not often found in the gravel segment. Slippery tube shapes, internal cable routing, and a fork flap to shield the front brake caliper show Pinarello’s penchant for minimal air resistance.

The result? Pinarello claims the Grevil F is 4% more aerodynamic than the 2018 Grevil, saving 5 watts at 40 kph.

Pinarello proudly states that it uses high-modulus and high-tensile-strength Toray T700 carbon to create areas of high rigidity balanced with zones of vibration absorption. The brand claims an 8% increase in stiffness at the bottom bracket compared to the Grevil.

It was fitting that Pinarello chose the history-laden Italian brand Campagnolo for components, outfitting our tester with an Ekar 1 x 13-speed groupset. A 40-tooth chainring mates to a 9-42 cassette.

Our 57.5cm tester, without bottle cages or pedals, weighs a verified 18 pounds, 15 ounces.

The Pinarello Grevil F in the Dirt: A True Race Chassis

As soon as I straddled the Grevil F, I could tell that it fit much more like a road bike than the other gravel bikes in my testing stable. It wasn’t as upright or compact, and being on the brake hoods felt more akin to endurance road machines.

The aggressive stance on the bike matched the handling cues the frame sent me. Rolling down the first hill, I knew that the Grevil F wasn’t there to deliver me home in comfort; it was there to get me back in the shortest time possible. I won’t go so far as to say it was a teeth-rattler, but it was much less compliant than any gravel rig I’d tested to date.

But when the path turned skyward, this stiffness paid dividends. When I stood on the pedals, I could feel the power going directly to the rear tire contact patch. There was less horizontal movement of the bottom bracket than I was used to, and the front end, from bars to fork ends, felt rigid and delivered my inputs without dilution.

As I collected dusty miles over 3 months of testing, I discovered the true target Pinarello set with the Grevil F. This was not a gravel “grinder,” happy to plod along on long exploratory journeys without time constraints. This was a gravel racer, destined for strenuous efforts with the manners to match.

The Grevil F begged me to bomb the descents but demanded attention. It wanted me to stand in the drops, actively absorb impacts, and deliberately steer down the best lines. I learned to memorize lines, which rain ruts to run with and where exactly to exit, which half-buried rocks to steer around and which to skim.

There was enough frame compliance to keep the tires in contact when I was carving correctly. And when my focus was unshakable, the Grevil F delivered downhill speeds I hadn’t seen.

On the flats, it was much of the same. On segments I typically cruised, hands on the hoods, transformed into high-tempo charges in the drops. The bike seemed to want that out of me.

For the first time since living here, I paid attention to each rock buried in the clay and sliced through the path of least resistance, which was the fastest on the Grevil F. And, for the first time, I sprinted out of turns, criterium-style.

Campagnolo has such a deep history. I really wanted to like the Ekar groupset, but I couldn’t give it the double thumbs up. The groupset was visually stunning, especially the carbon cranks and spider, which matched the Grevil F’s flowy curves.

The brakes were among the best I’ve used for gravel. They provided a linear and easy-to-control progression of stopping force, and the hoods and levers fit my hands better than anything I’ve used to date.

The brake action never felt too abrupt on loose terrain, but it provided ample power to quickly stop when traction was abundant.

But I could never get the shifting to be clean on both ends of the 13-speed, 9-42 tooth cassette, and neither could any of my pro mechanic friends. We repeatedly adjusted the rear derailleur but to no avail.

I had terrible shifts on the large or small side of the range. I don’t know if it was a cable friction issue or a chainstay length issue (the Grevil F has relatively short chain stays).

And then there was the endless amount of adjusting displayed how finicky the shifting could be — tiny cable tension adjustments produced considerable changes in the shifting.

I approached the thumb shift lever with an open mind but never took to it. It felt awkward compared to other systems. Whether from the hoods or drops, I felt like I had to make a wrist adjustment that I didn’t have to do on anything else.

The Fulcrum wheels were … just wheels. They proved sturdy, and I classified them as workhorse hoops.

But on an aero frame sporting an aero fork flap, the Rapid Red 500 wheelset was underwhelming. The Grevil F begged for taller, more aerodynamic carbon wheels befitting Pinarello’s efforts to have it slip through the air.

I had similar feelings about the stem, bars, and saddle. The house brand cockpit components did their jobs without flash. I cannot complain about functionality; I only felt that they didn’t match the design, engineering, and visual impact of the Grevil F frame.

One thing Pinarello added to the Grevil F that I loved was the tool-free thru-axles. They hid pull-out levers that facilitated removal and tightening without tools but kept the clean aero look intact.

The Grevil F Ekar felt like a teaser of what an ultimate gravel racer could be. It wasn’t trying to be the do-it-all gravel bike like many others. There are no luggage bosses, and it’s stiff.

Yes, Pinarello flexed design cues that lent some compliance, but efficiency and responsiveness towered over comfort. I loved that single-mindedness and what it produced in chassis manners.

But the groupset and wheels left me wanting more. If I were already spending the money for a Grevil F Ekar, I would spend more to make it the Grevil F of my dreams. I would upgrade the components and wheels, wait for Pinarello to offer other builds, or buy a frameset and build it myself.

The frameset was so good at going fast over everything, giving credence to the “Full Gas Everywhere” tagline. Pedal hard, pay attention, and be engaged with the terrain, and the Grevil F can attain maximum velocity over all else. No apologies.